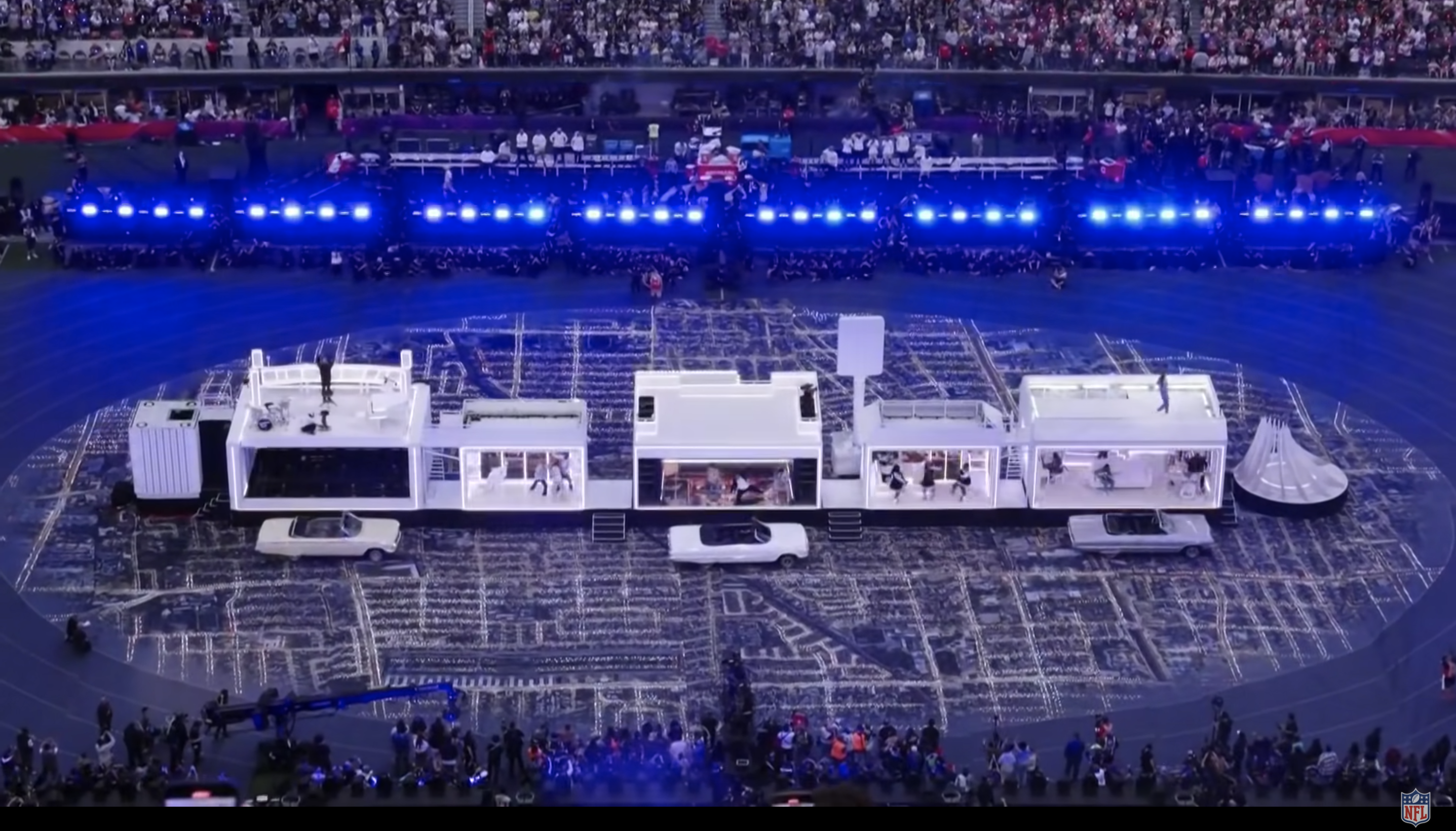 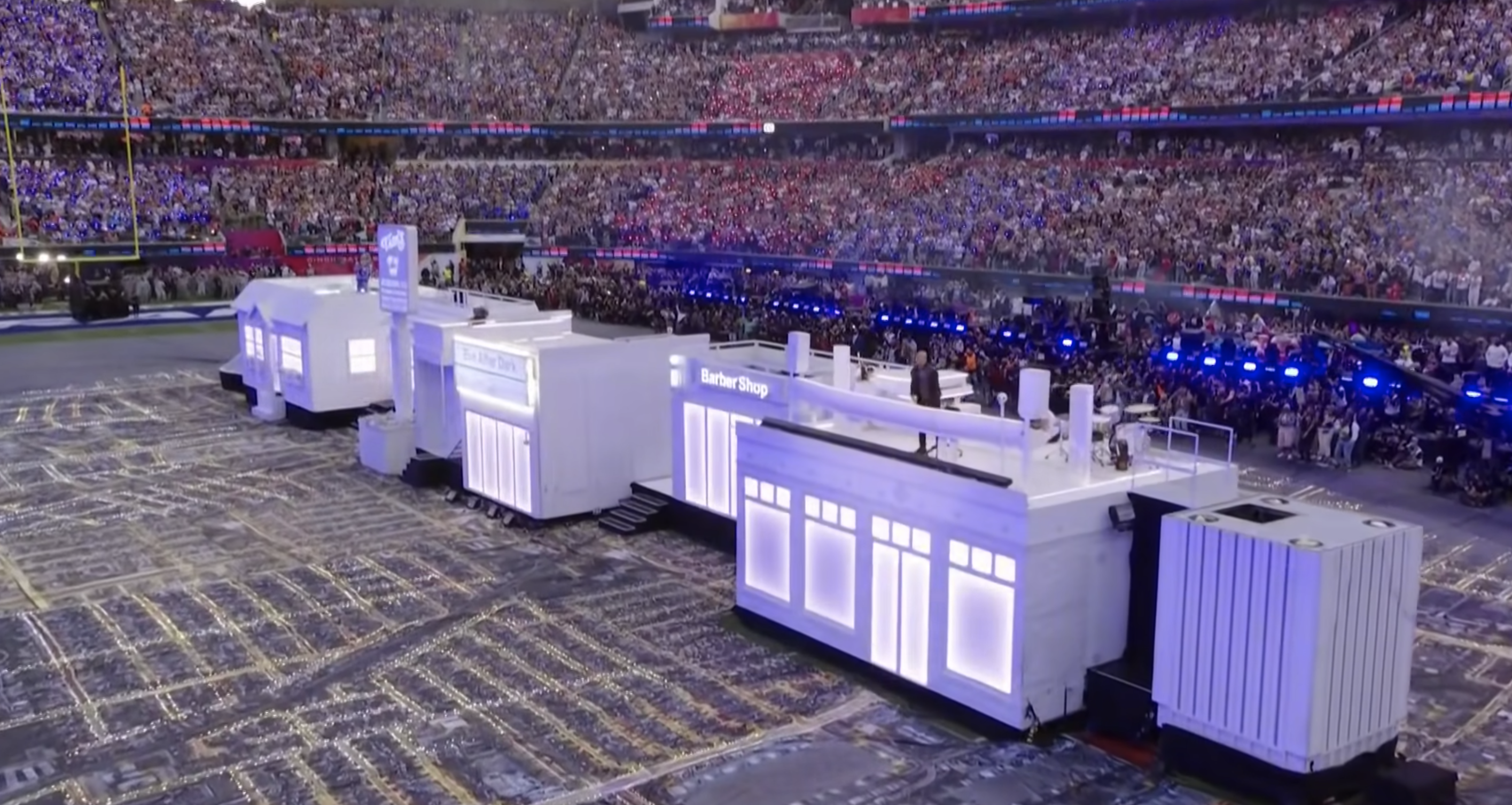 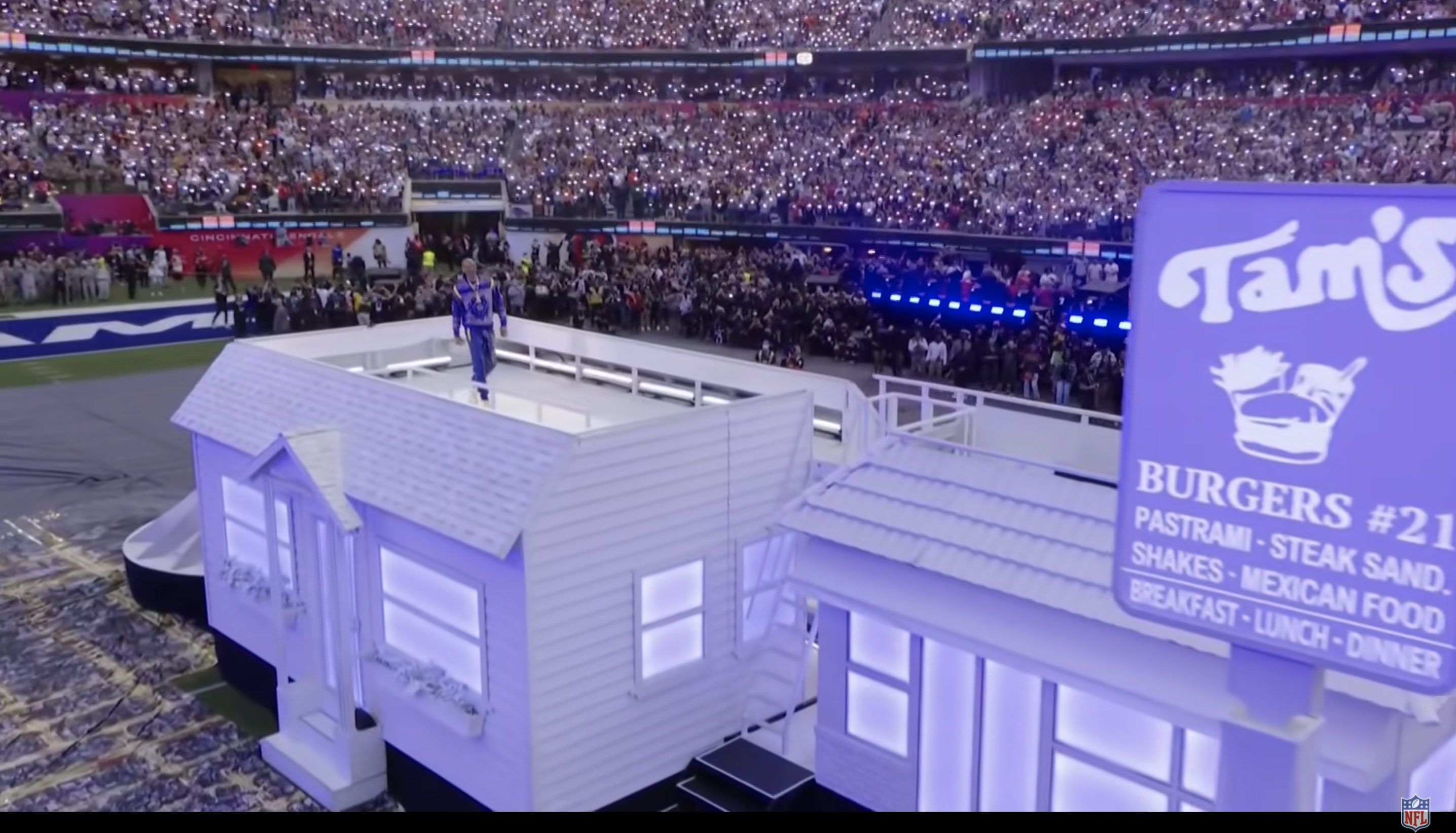 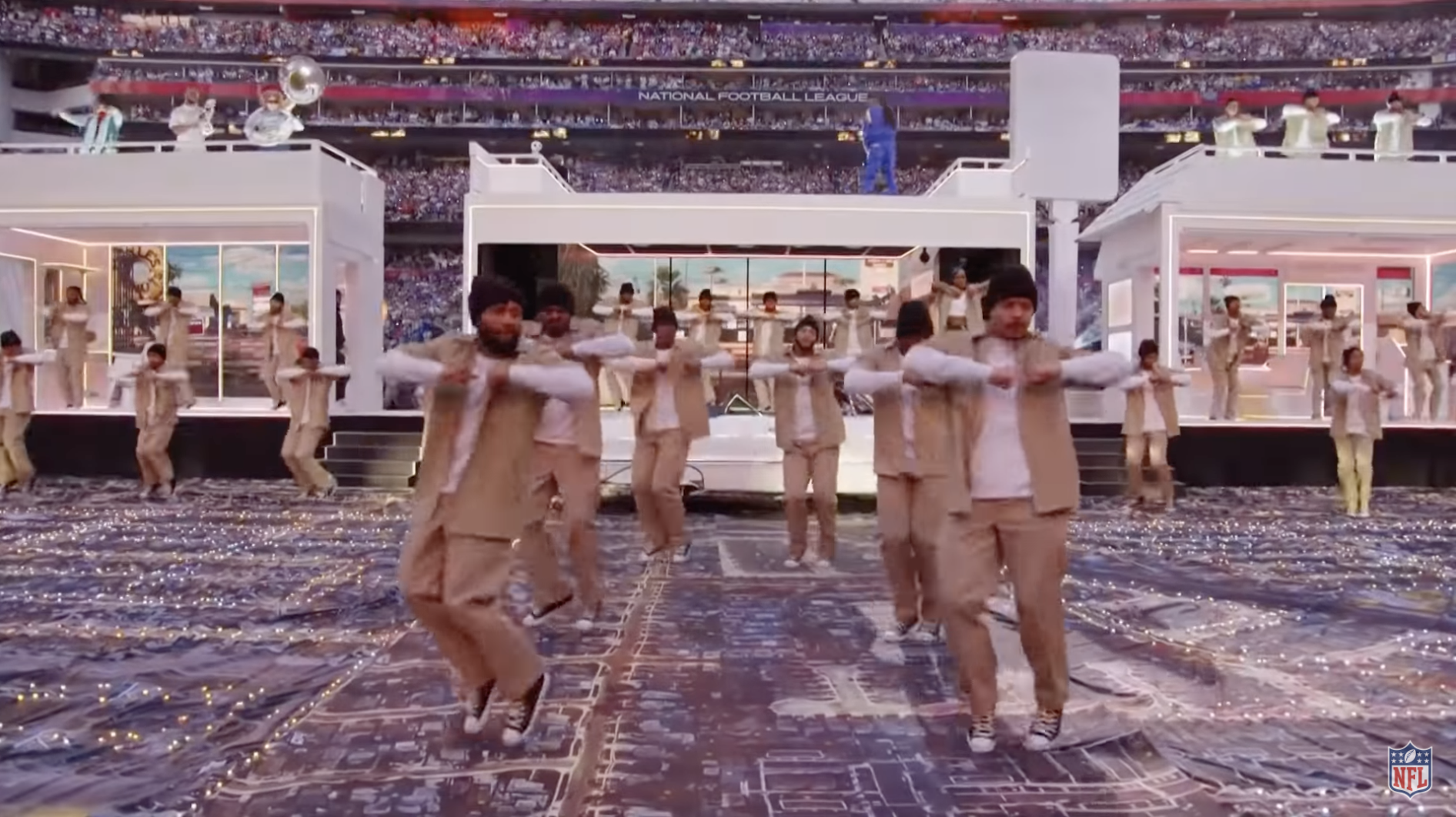 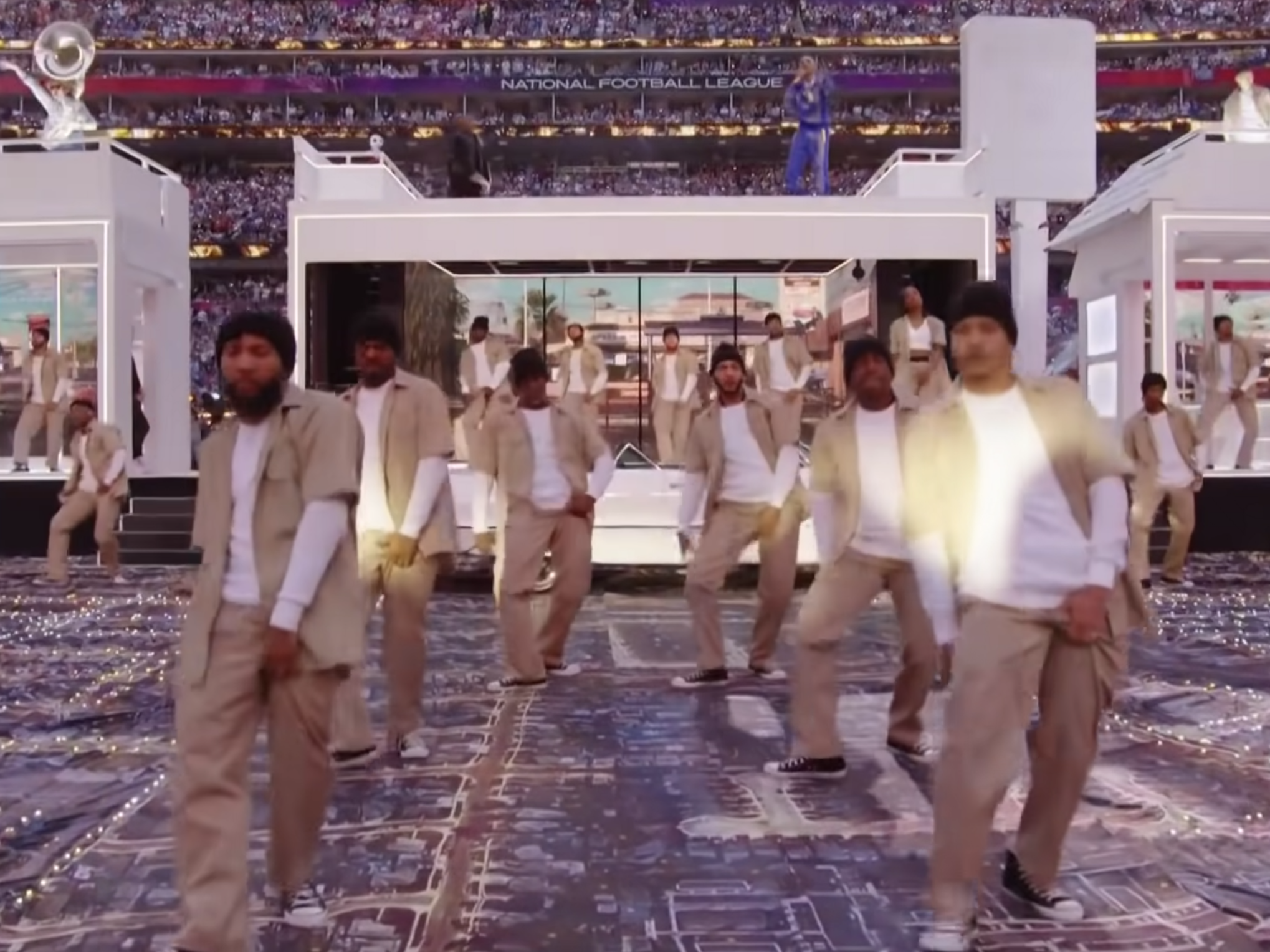 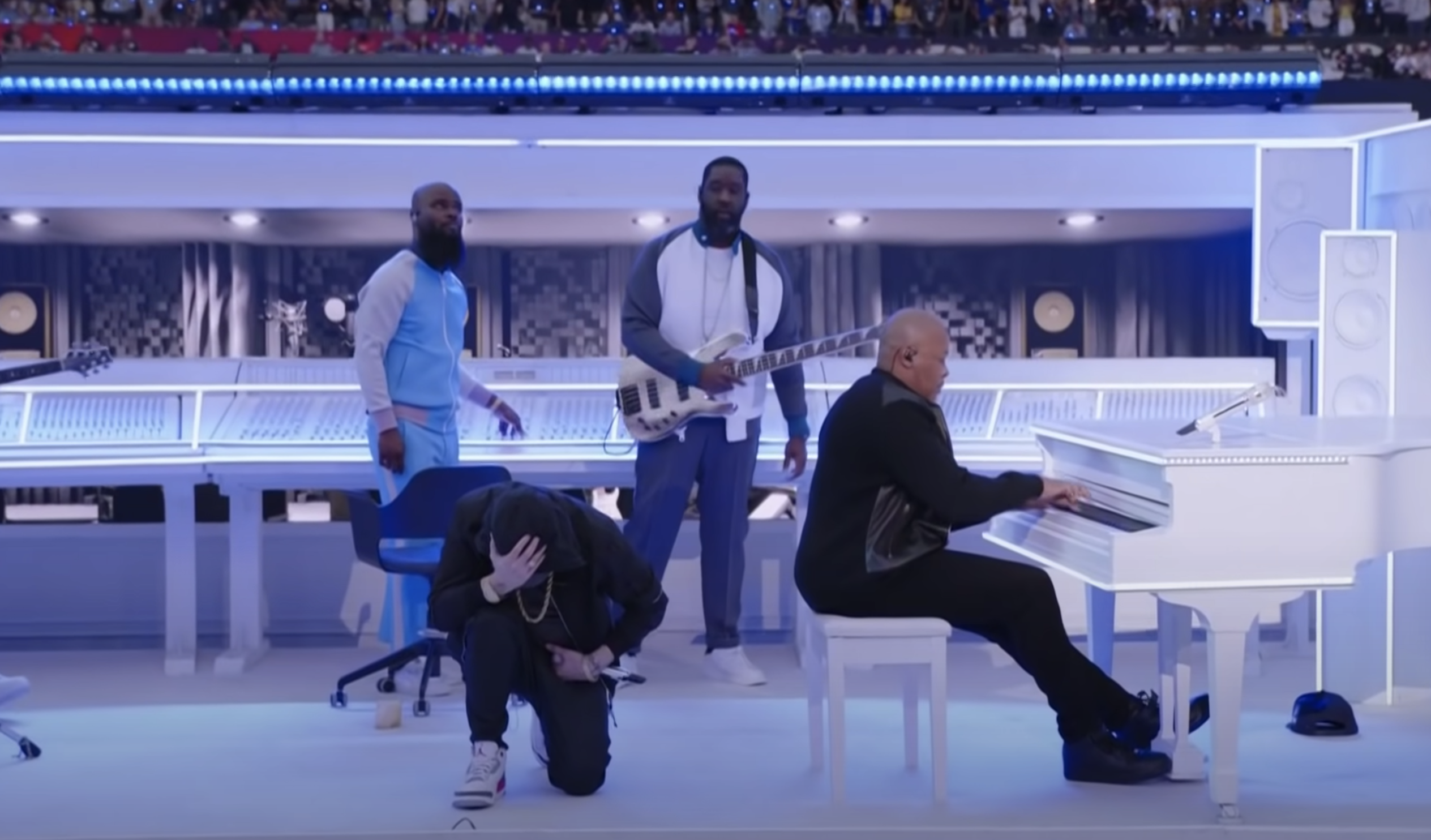 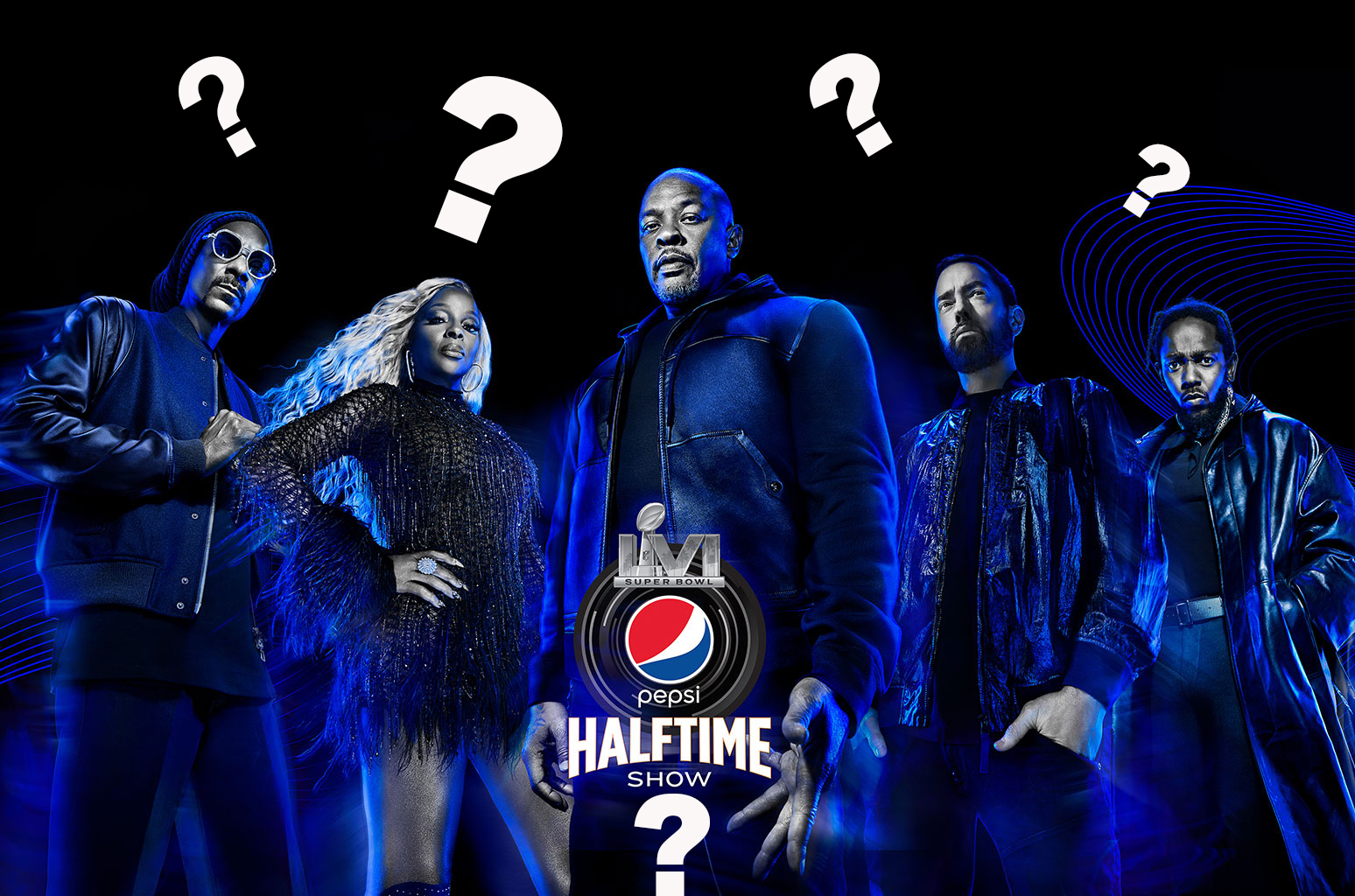 Many have talked about the performances at the Super Bowl halftime show. How it was the best show ever and the pride and joy they felt as a result. IG, Twitter, and FB were all full of the same sentiments. Black Joy is such a needed thing for Black people, but I feel compelled to offer another perspective.

Snoop’s performance was on point, no doubt, and I thought many of the musicians were feelin it and could not have played any tighter. However, it was all overshadowed for me because of the following.

The $13 million dollar event was mostly paid for by Dr. Dre, he paid $7 million of that cost. With that said I was really taken by the set. The pristine white Tam’s Burger and the house representing Compton Ca. When Snoop walked down from the roof and into the house it looked like he was still in white heaven.

In front of the perfectly manicured low riders, we see dancers wearing Dickies which originated with our Cholos back in the day and were later adopted by Crips. One of the dancers featured for a quick second even had a shoulder pouch on resembling a shoulder holster for a gun. All of this added up to pretending to give an “authentic” look into Compton.

I’m not sure if Compton is in white heaven but thats what it felt like. When all semblances of reality is removed from something it becomes a fantasy or a dream. Whose fantasy or dream is it? White America’s!  A place where Blk people live where they will not rebel (like white men did on Jan. 6th), boycott, or strike as a result of the conditions but will be happy Crip walking, singing and dancing for their edgy entertainment.

I am not saying I needed to see brothers hemmed up against police cars for the halftime show to feel authentic but there was something missing that speaks to the day to day reality. That day to day reality and silent desperation was responsible for the crack epidemic. Now we have suicide rates of young Blk boys and girls over twice as high as whites the same age.

I lived in LA for over 7 years so I know that Black people make up around 8% of the population but represent over 30% of homeless population. Since the year 2000 there have been almost 1000 homicides committed by police. 80% against Black and Brown men and 97% were shot to death. Only two officers were said to have pulled the triggers without justification. We know that’s simply not the case since there are gangs within LA’s law enforcement as many know, complete with tattoos and gang signs.

Public schools in LA are underfunded and overcrowded, the result is many undereducated students graduating or not and ill equipped to do anything but work low paying dead-end jobs or join a gangs.

I know, I know, I can hear it now. Dr. Dre has given this much to this charity and that charity. If we had half the unity (which he could have demonstrated) that other groups have we would not need any philanthropy.

In terms of solidarity Dr.Dre went from kneeling with Kap in a photo to performing during half time in white heaven. Speaking of solidarity, to my knowledge not one Blk entertainer has joined India Irie in pulling their music from Spotify that I know of. Until we start showing some unity we will not only be called Niggas and Niggers we will be treated as such.

While I would have preferred a Blk person to have taken a knee, M&M it looks like you will have to do. Unlike K Dot says, I don’t think we gonna be alright because we as Blk people are not acting together AND are not solving our long standing issues. We did vote and prevent Trump from getting back on office but that was America’s problem as well.

Anyway, thanks for reading and if Candice Owens liked the SuperBowl’s halftime show I know I can’t be all that wrong.

For those yet to come, here now, and who have passed.

These are the words of Malcolm H.